On Wednesday night the 28th of May 2014, we had the privilege of visiting News Life Media Studios which are not normally open to the public. Thirty two of our members travelled from the RSL club by two comfortable coaches and Nigel Lough, one of the 6 staff photographers at News, very generously took the time to show us around the complex. Nigel is our President’s son in law and that’s him kneeling in the front row. 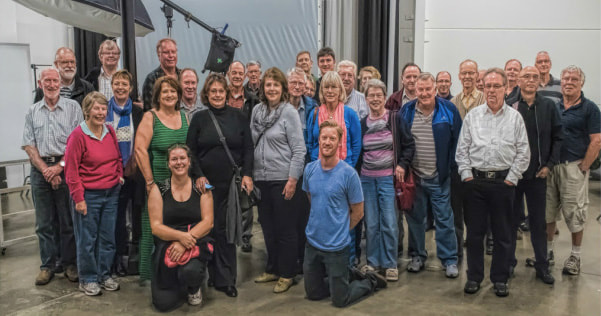 The complex includes 5 large studios with 5m high ceilings, some having large roller doors allowing street level access for vehicles. For some lifestyle shoots, clients such as Harvey Norman, Domayne and David Jones can easily bring in all their equipment, setup, do the shoot, then take it all away by truck.

There are 3 studios set up with full kitchen facilities and most of the studio shots seen in their food magazines have been shot here. Shooting with Canon 1DS, using prime lenses and a light meter, Nigel showed us how using white HMI lights they can simulate daylight all day long without relying on the vagaries of the sun. 95% of shots are done using large black or white poly board reflectors to bounce the light off. Their HMI lights are 1200 watts, cost about $10,000 each, and even have UV filters so the staff don’t get sun-burnt.

A photo shoot for one plate of food can take all day, involving a chef who prepares an abundance of food (yes, there are leftovers for the staff), a food stylist, the photographer, their assistant, and an art director. A re-toucher is also employed by the studio 2 days a week.

Cameras are tethered to a computer so photos can be reviewed on a monitor as they are shot using Capture One software. They shoot a multitude of photos from all angles, using many setups, changing the accessories and backgrounds. These shots are sent to the magazines to give the clients lots of options from which to choose.

Photographing food, almost always shooting macro, they use Foba or Cambo studio stands to hold the camera rock steady. They shoot in RAW, at several different f stops to get a good range to choose from. Nigel’s tip for shooting food is never shoot straight at a plate of food, you need to shoot down at an angle, using a 90mm tilt/shift lens so you can fix the verticals. What they shoot never looks quite like what comes out in the mag after it’s been sent back to the clients, as it’s extensively retouched and photo-shopped.

Nigel also added that models are thinned, shaped and complexions made flawless before they’re used on front covers of magazines.

The kitchens are also used for filming segments for Donna Hay, etc, using Canon 5d’s. These crews can include videographers, editors, directors and producers. The staff photographers like to swap around the various types of shoots so one day they might shoot food, then another day, portraits, lifestyle or a video.

One of the most interesting parts of the night was the portrait shoot of some members of the club, Ivan, Merrilyn and Bill. Our 3 members have joined the likes of Nicole Kidman, Hugh Jackman and Elle McPherson who are regularly shot in this studio. Although our 3 celebrities didn’t bring their own makeup artists most other celebs do, many requesting their preferred photographer, art directors, etc.

Nigel said, If you want the light to be softer, move it closer to the subject, if you want it harsher, move it further away. Our photos were shot at 100 ISO, f8, 160th on manual focus.

Asking your subject not to move, manually focus on the eyes using live view on the back of the camera then change back to the view finder for the actual shot. For Bill’s portrait a “beauty dish” was put over the light, the poly boards where moved in close to show more detail in his face. As you can see a great result for a quick 10 minute setup.